Roughing it when you’re in a cabin is all great in theory, but modern conveniences are pretty nice. That’s why we decided having running water and electricity at the cabin was high on our priority list. We decided the best way to do this was to dig a trench for the water line and electrical from our house out to the cabin site, lay the electrical cable and water conduit, and then backfill the dirt.

We rented a mini-excavator from Simplex in Cornwall to dig the trench. The trench had to be at least four feet deep for the water line to be below the frost level. The cabin is basically straight behind our house, but there is about 300 feet of dense trees in between. So rather than dig the trench in between all the trees, Tony took the long route down the driveway. That ended up being about 500 feet total. 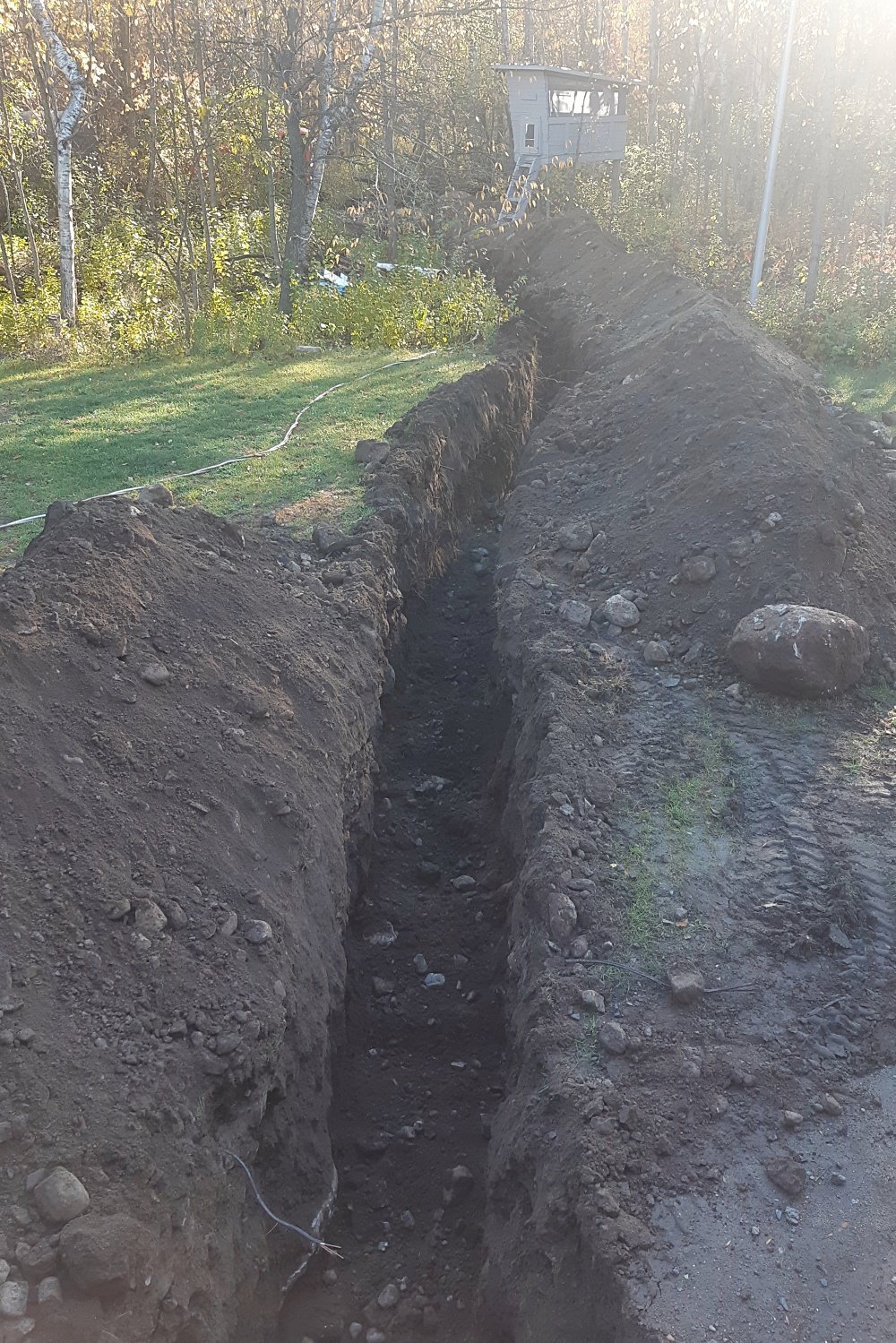 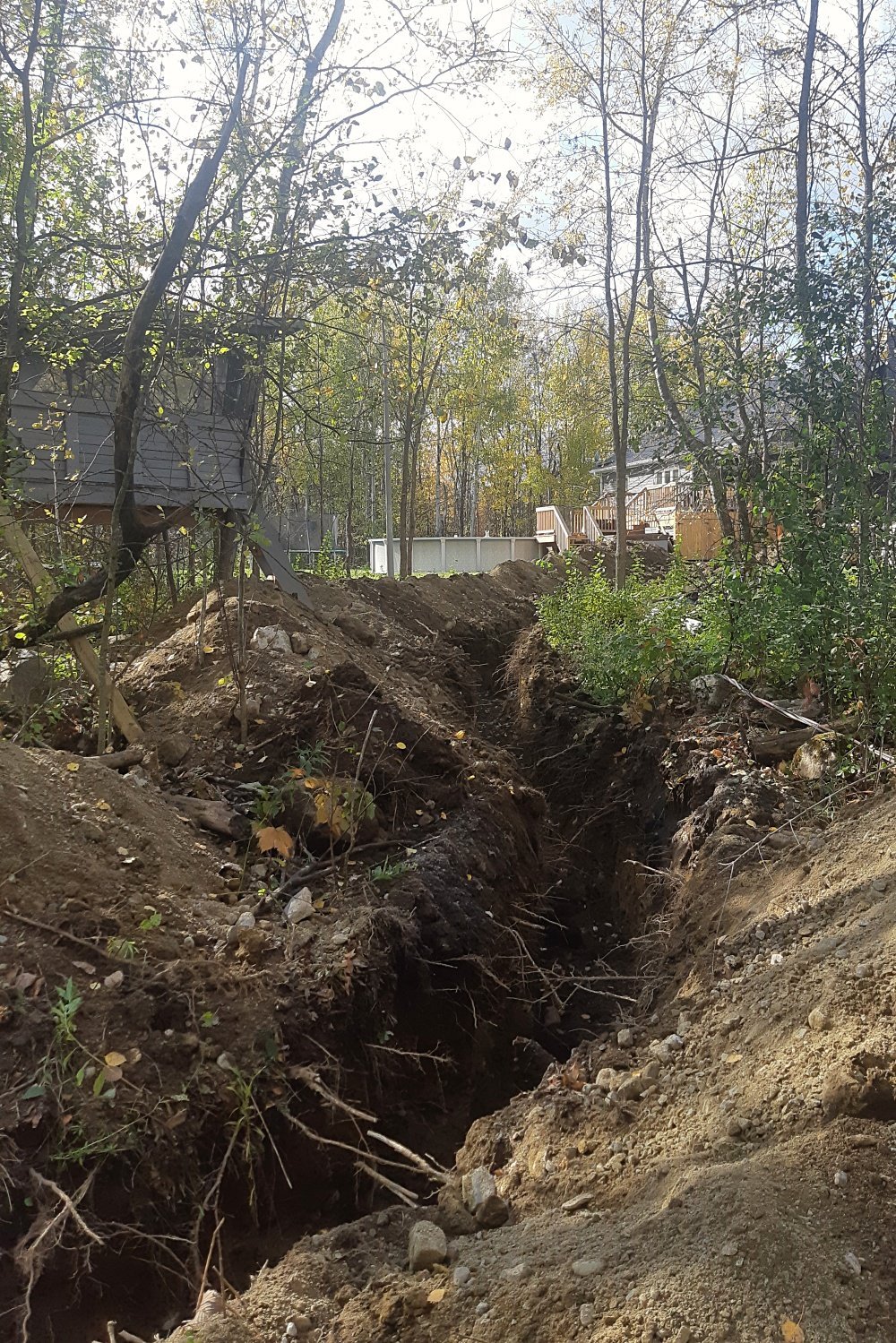 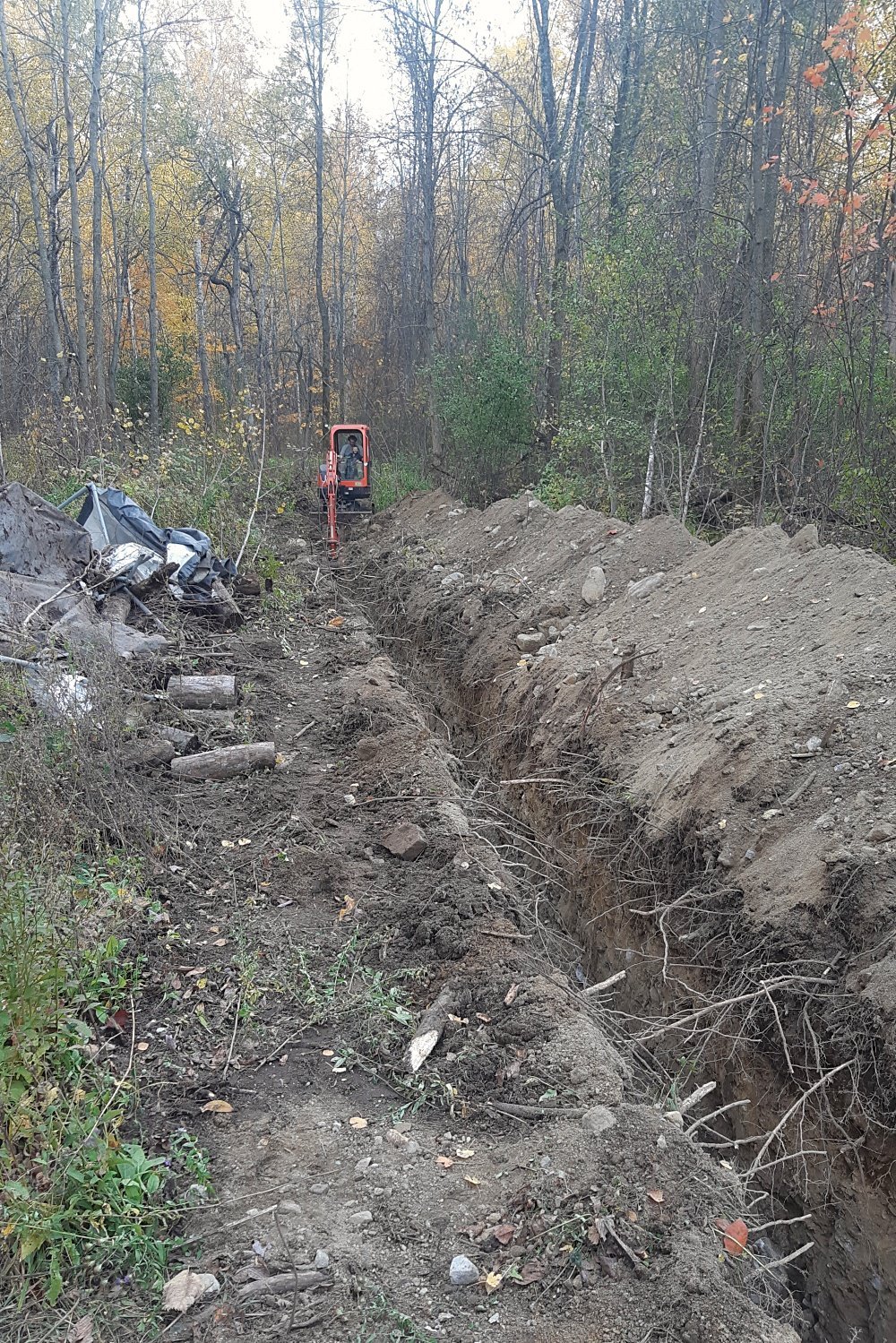 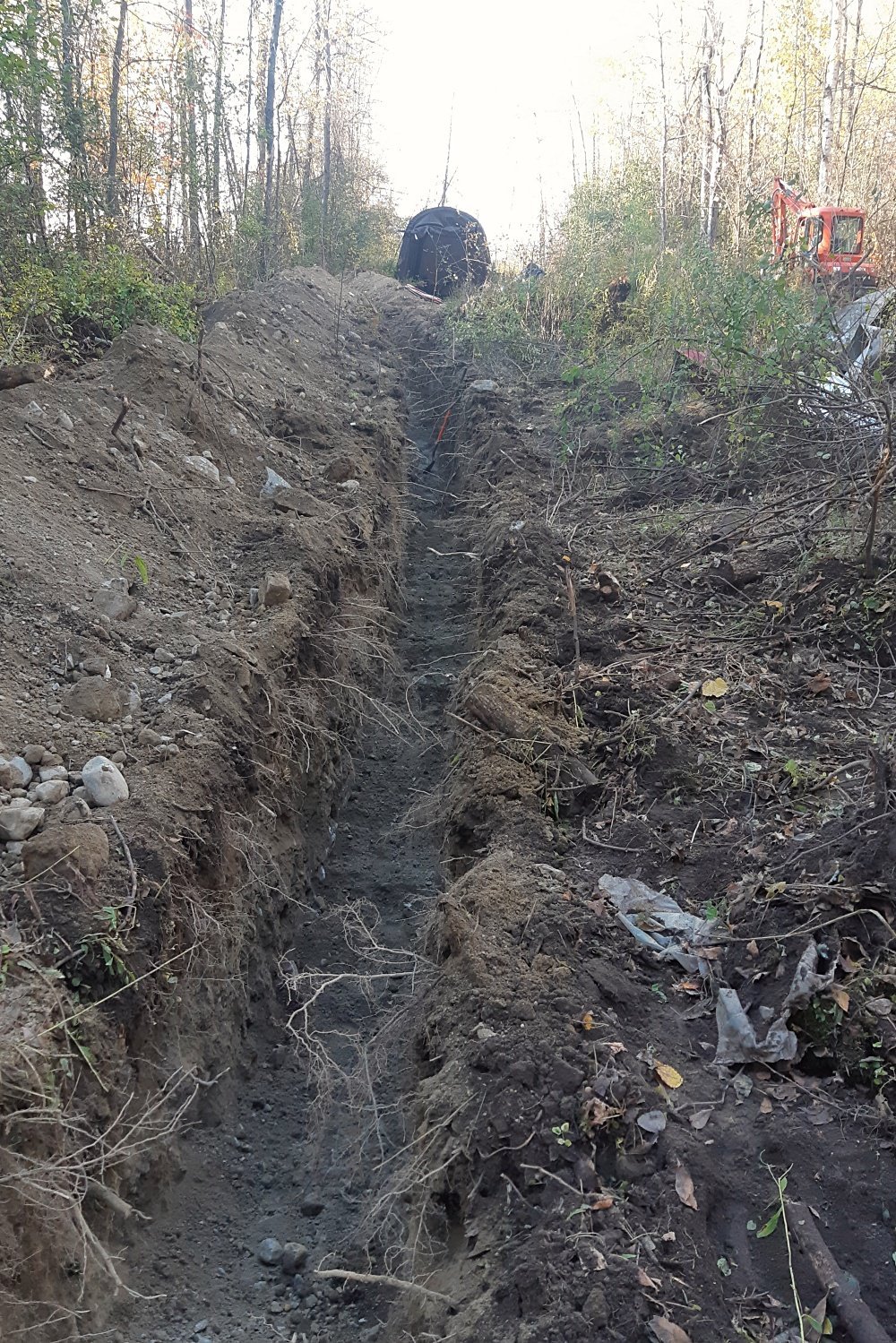 2. Lay a base of sand in the trench

In order to protect the water line from being punctured from rocks, you need to lay a bed of sand in the bottom of the trench. Tony’s dad drove the tractor and dumped sand all along the trench, and I got the fun job of shoveling it out. 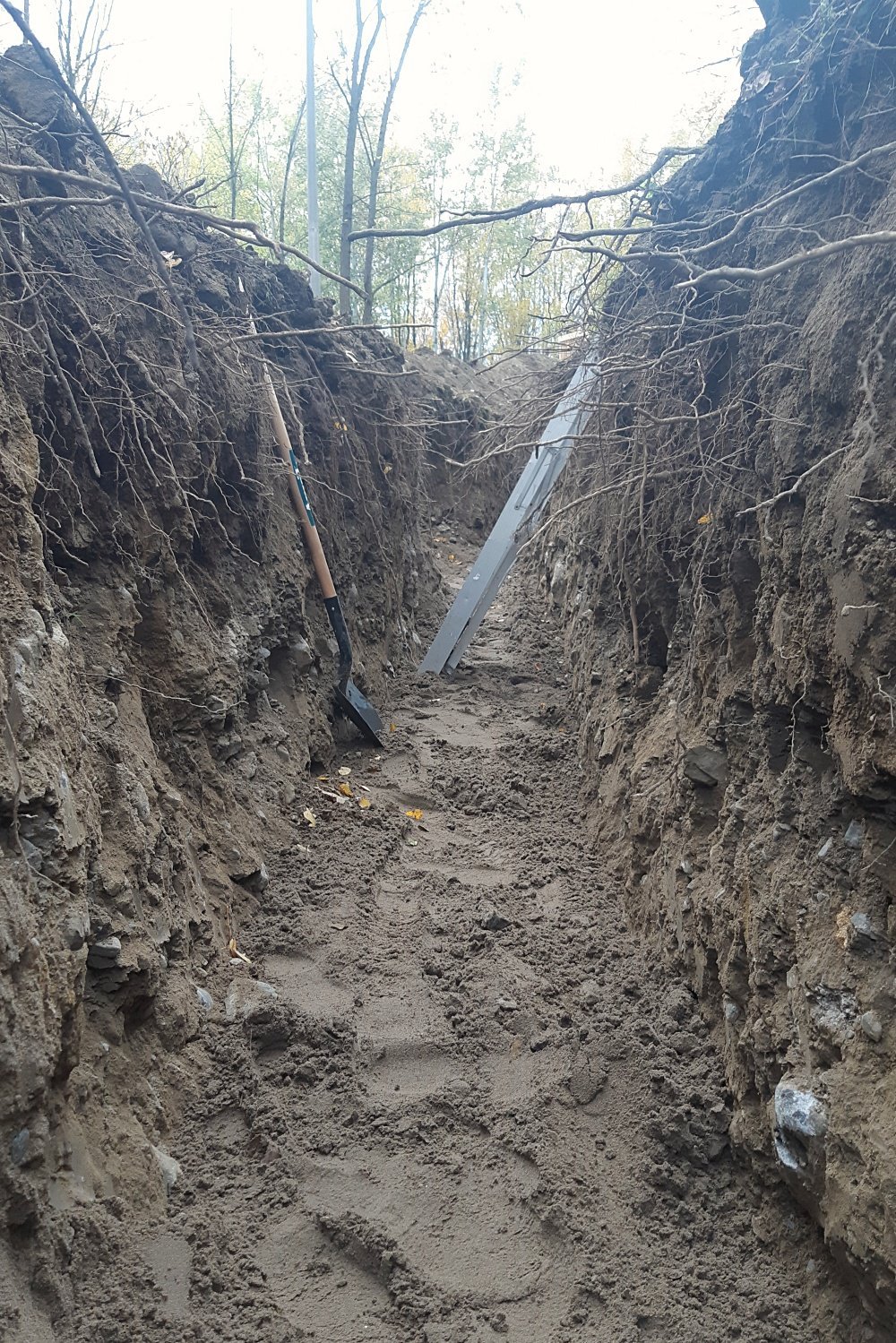 3. Lay the wire and water line and cover with sand

Tony works for a hydro company so was able to get scrap pieces of electrical wire that he spliced together. This was a huge cost savings. We layed out the wire and PVC conduit all along the trench. Then we did another six inches or so of sand on top of the conduit to protect it from rocks while backfilling. 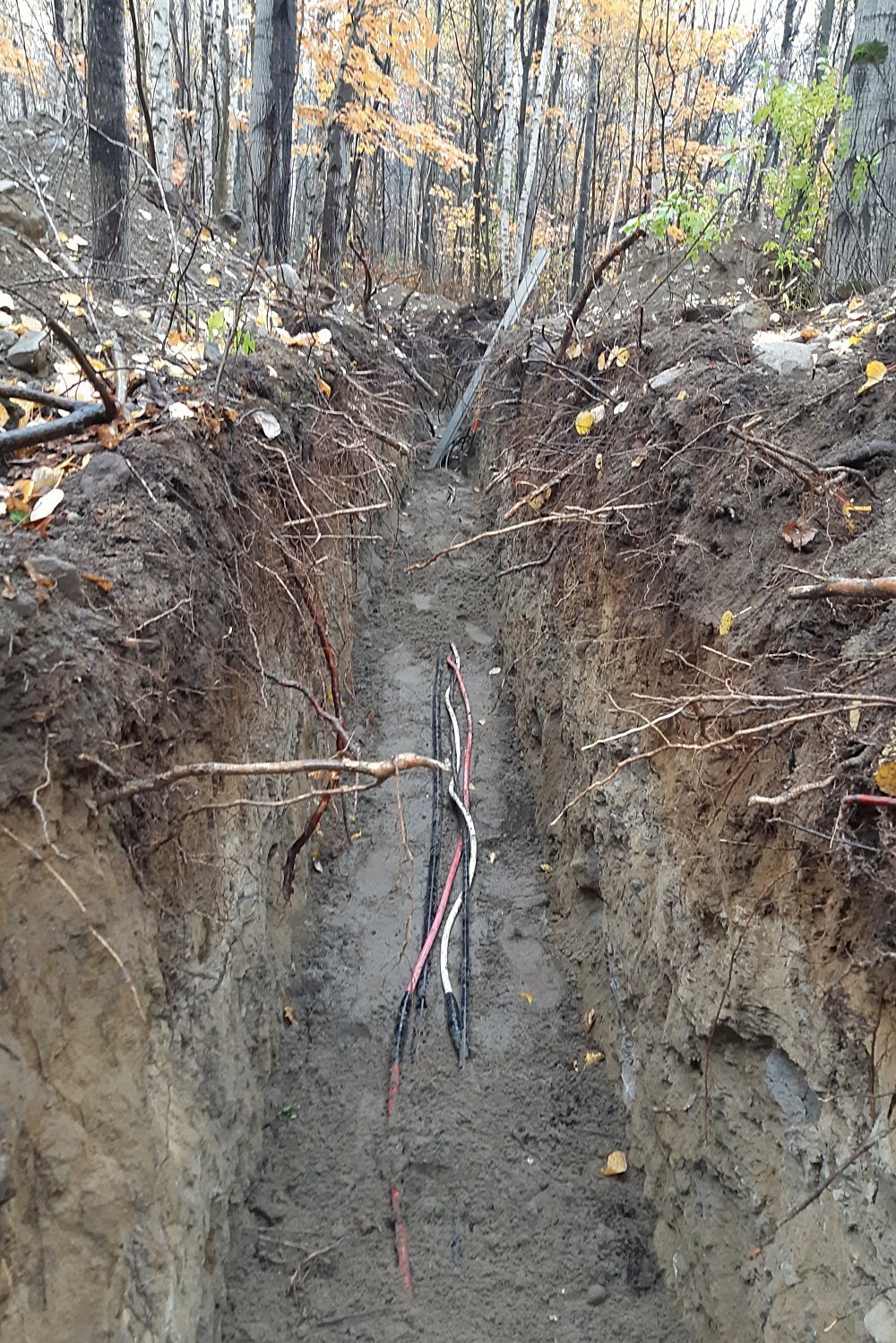 Once the wire and conduit were in place, Tony backfilled the entire trench. This task took much less time than digging. Tony is always optimistic with his time and figured we could do the entire trench all in two days. It didn’t take too much longer, we worked three long tiring days and got this job done. There’s a ton of work to do including picking stones, leveling the dirt, and spreading grass seed, but this was a huge job that went pretty much according to plan. 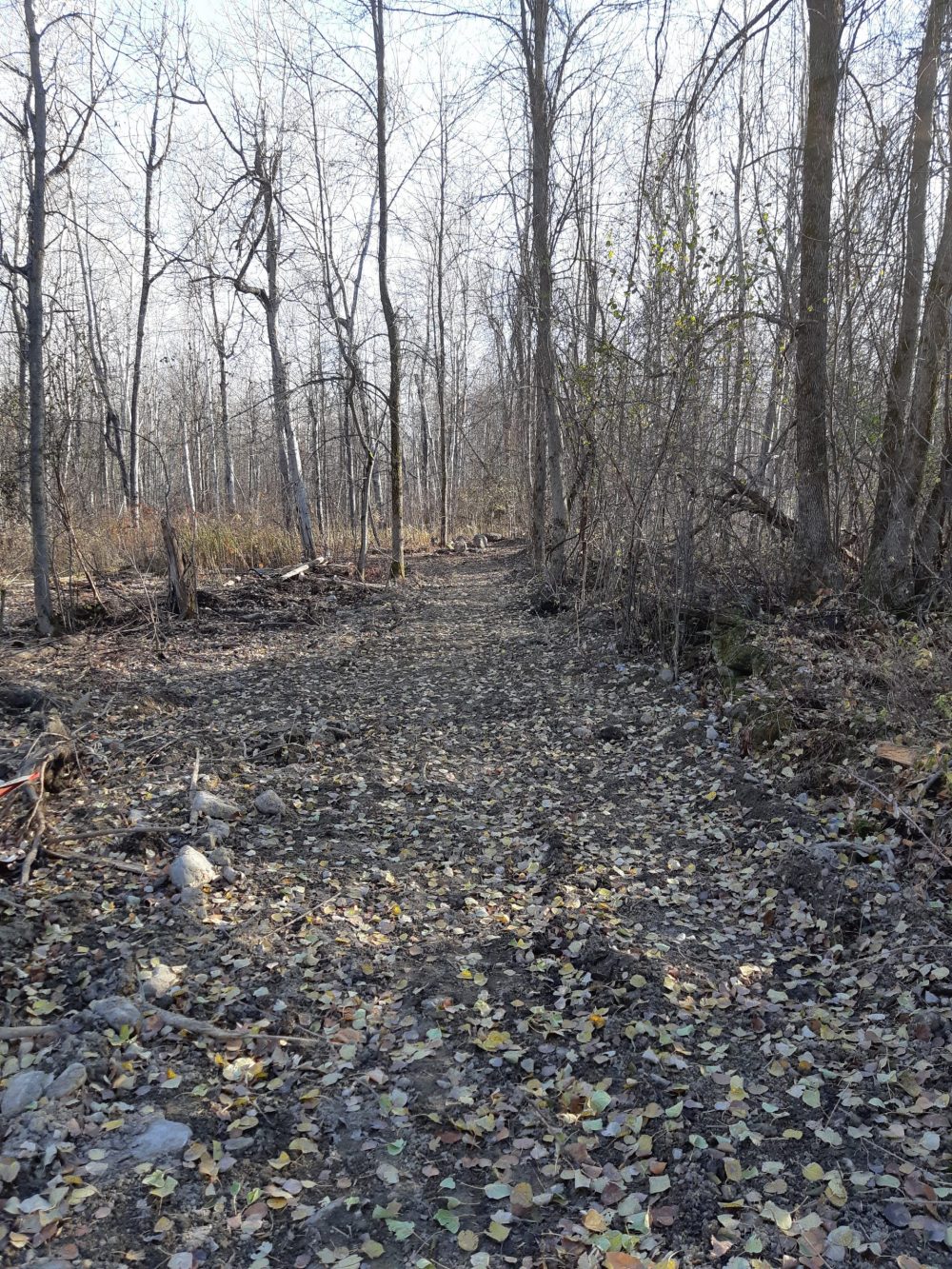 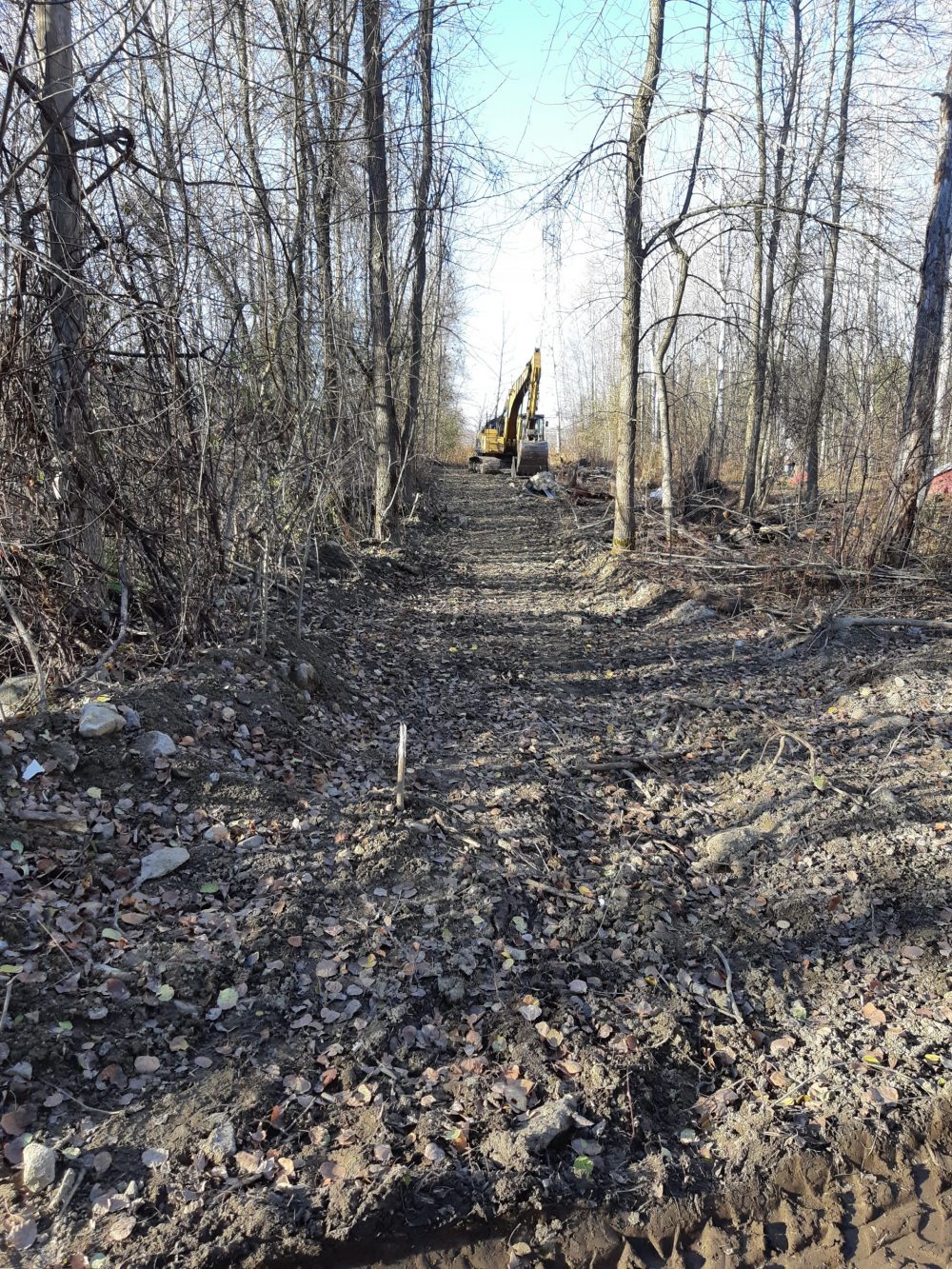 Phase 3: Closing in the cabin

Previous Post: « We are building a tiny cabin in the woods
Next Post: Cabin phase 1: Basement room, gravel pad, blocks, and beams for the cabin » 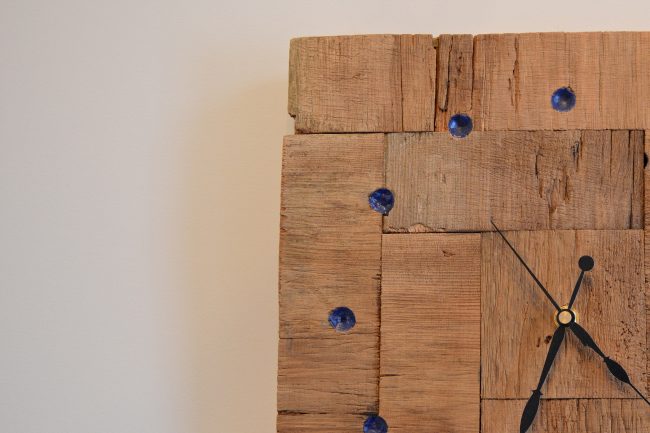 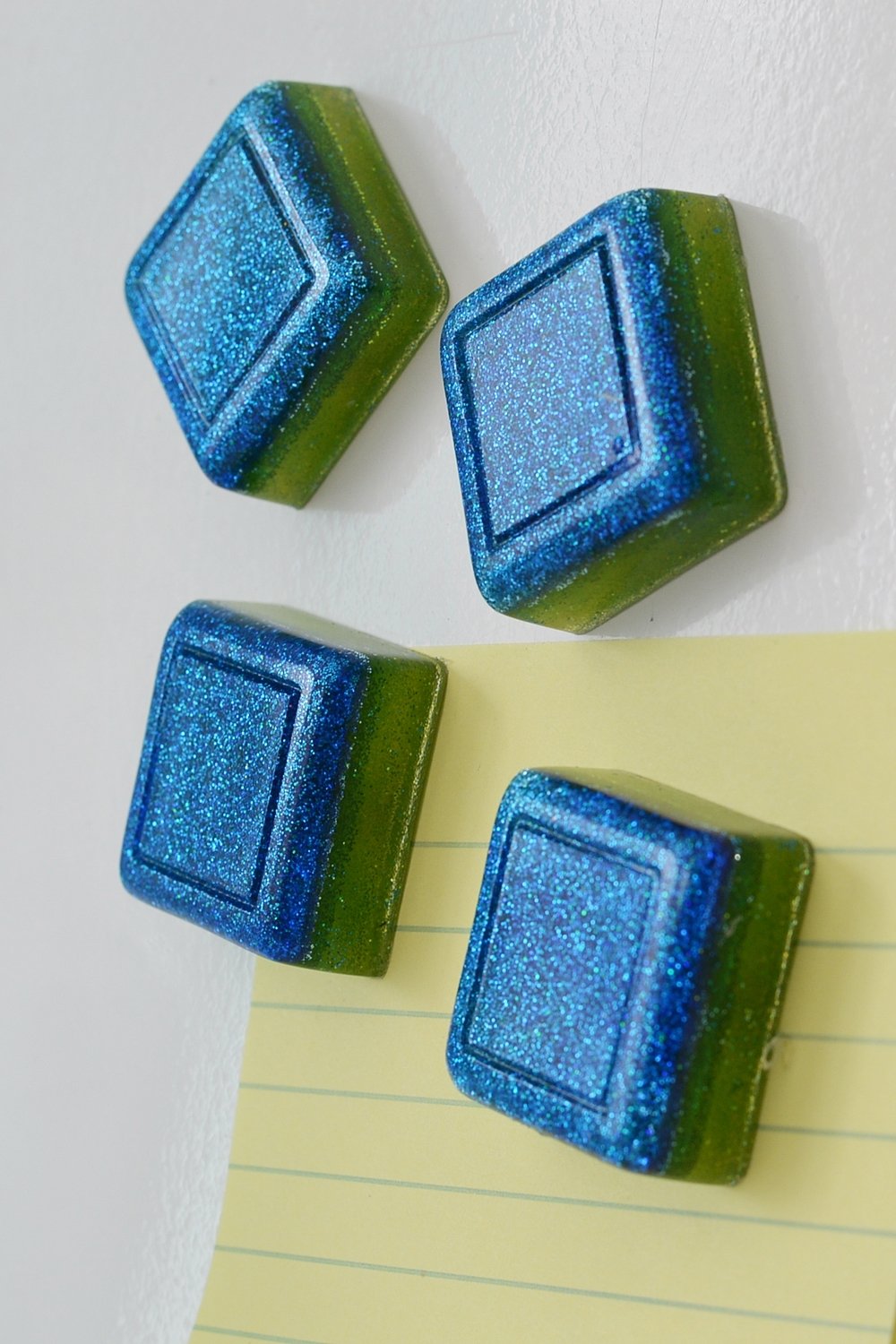 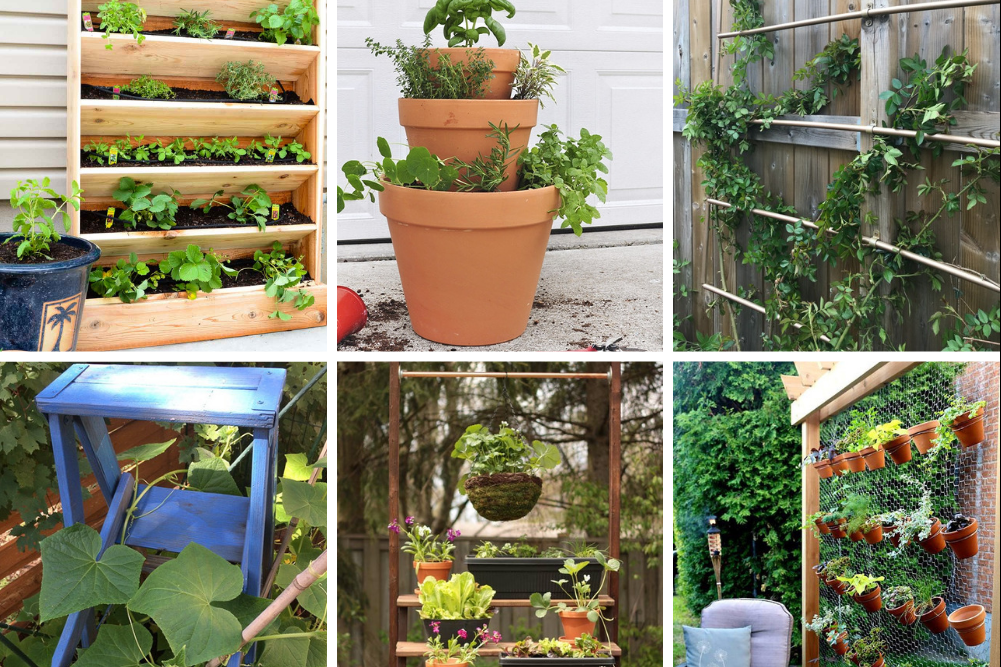 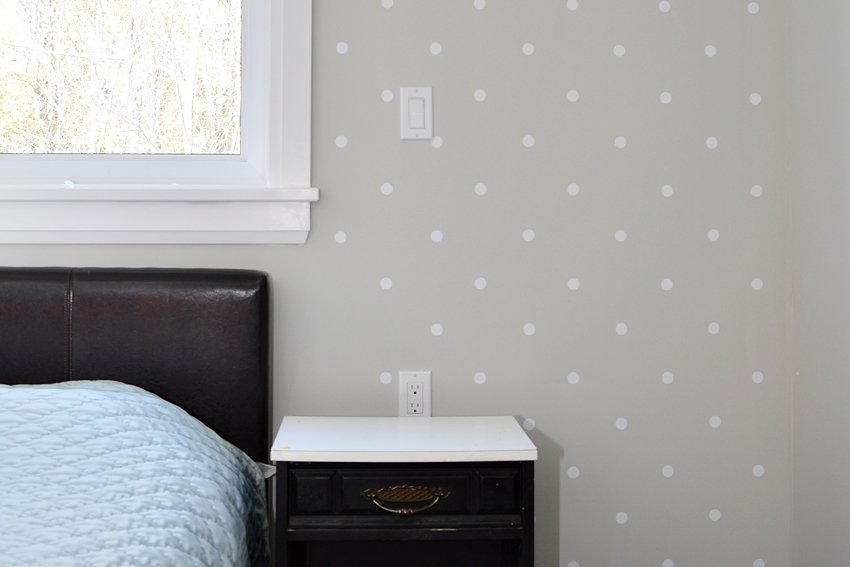 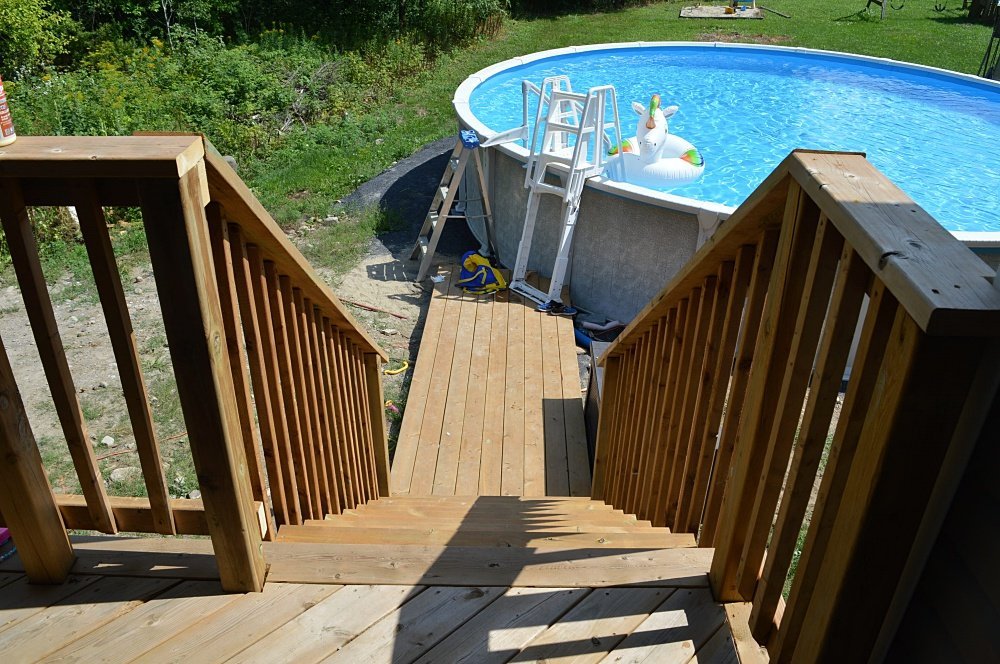