We finally finished off the covered deck at the back of the house! This was one of the last big things we needed to finish before we can get our occupancy permit from the township. This deck was supposed to be my little project that I could work on in my spare time…so naturally it took a little over three months, and that was only when I called in for some help. 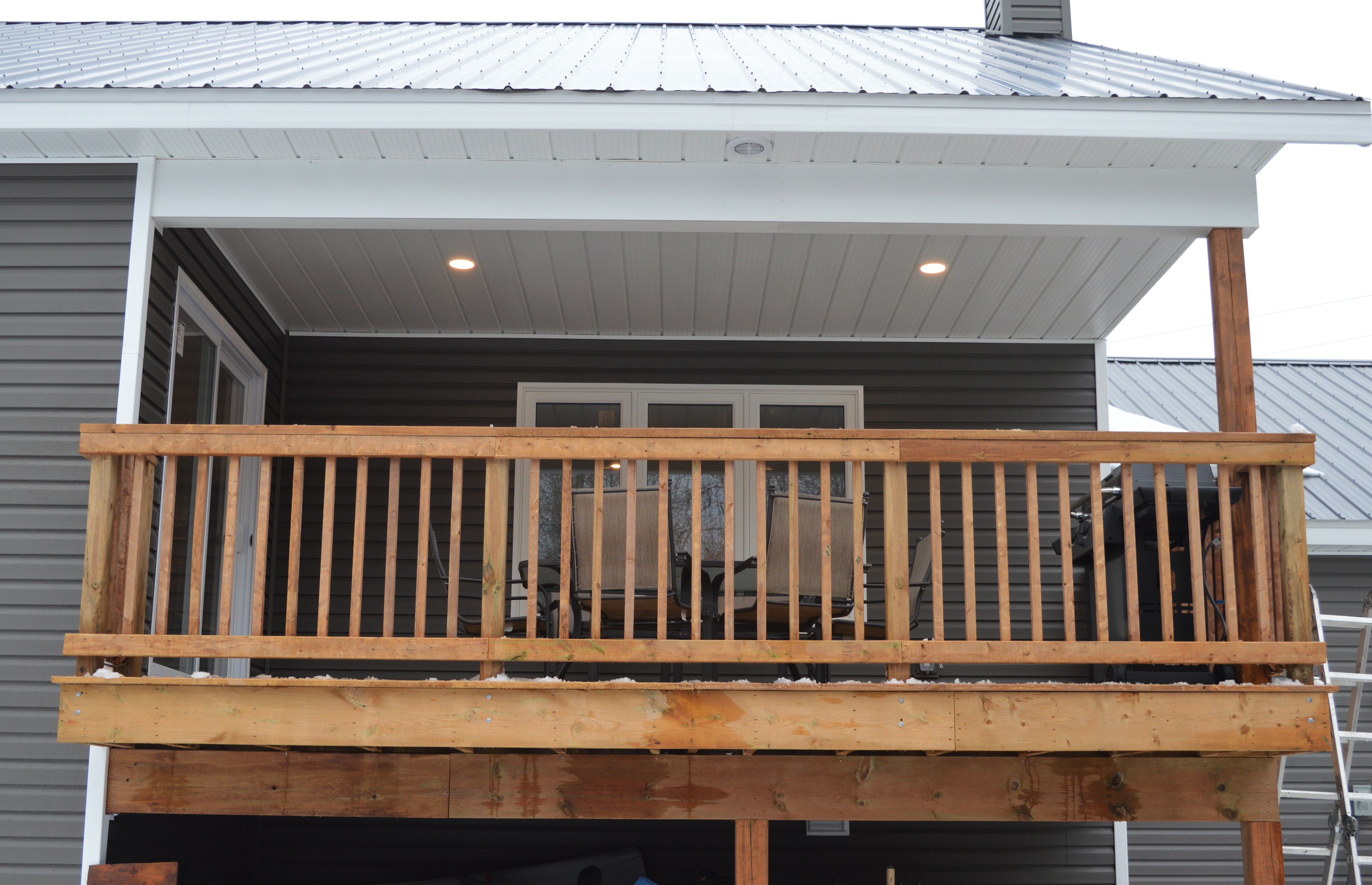 Here is how the deck looked in the summer. It was basically just the joists and the supporting posts with no deck boards (the second picture has temporary plywood down just so we could walk on it safely). 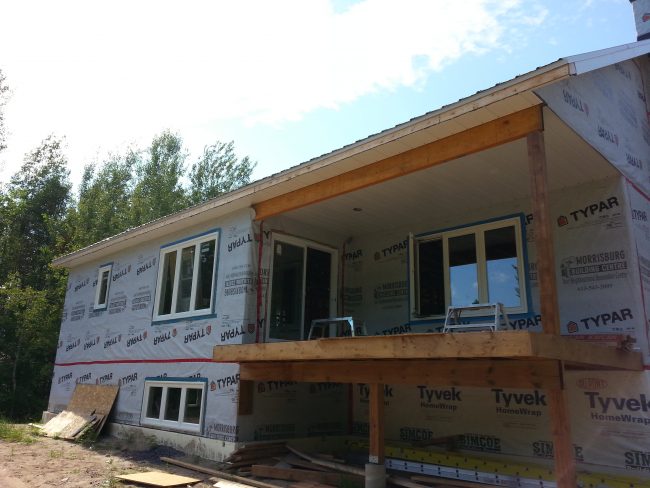 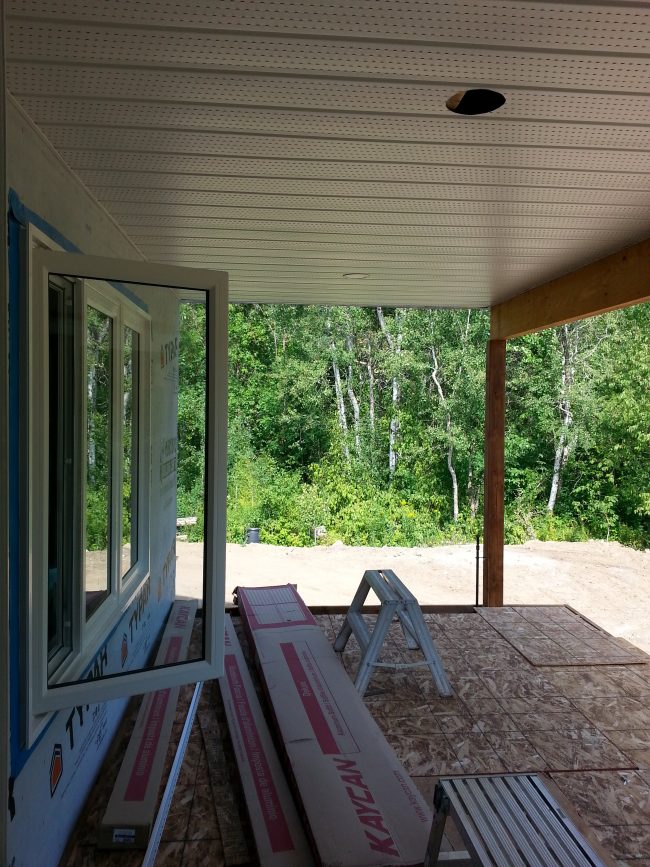 Tony left it up to me to decide on the pattern for the deck boards. So I decided on a fancy pattern with a perimeter board and diagonal deck boards. We used brown pressure treated lumber for everything. 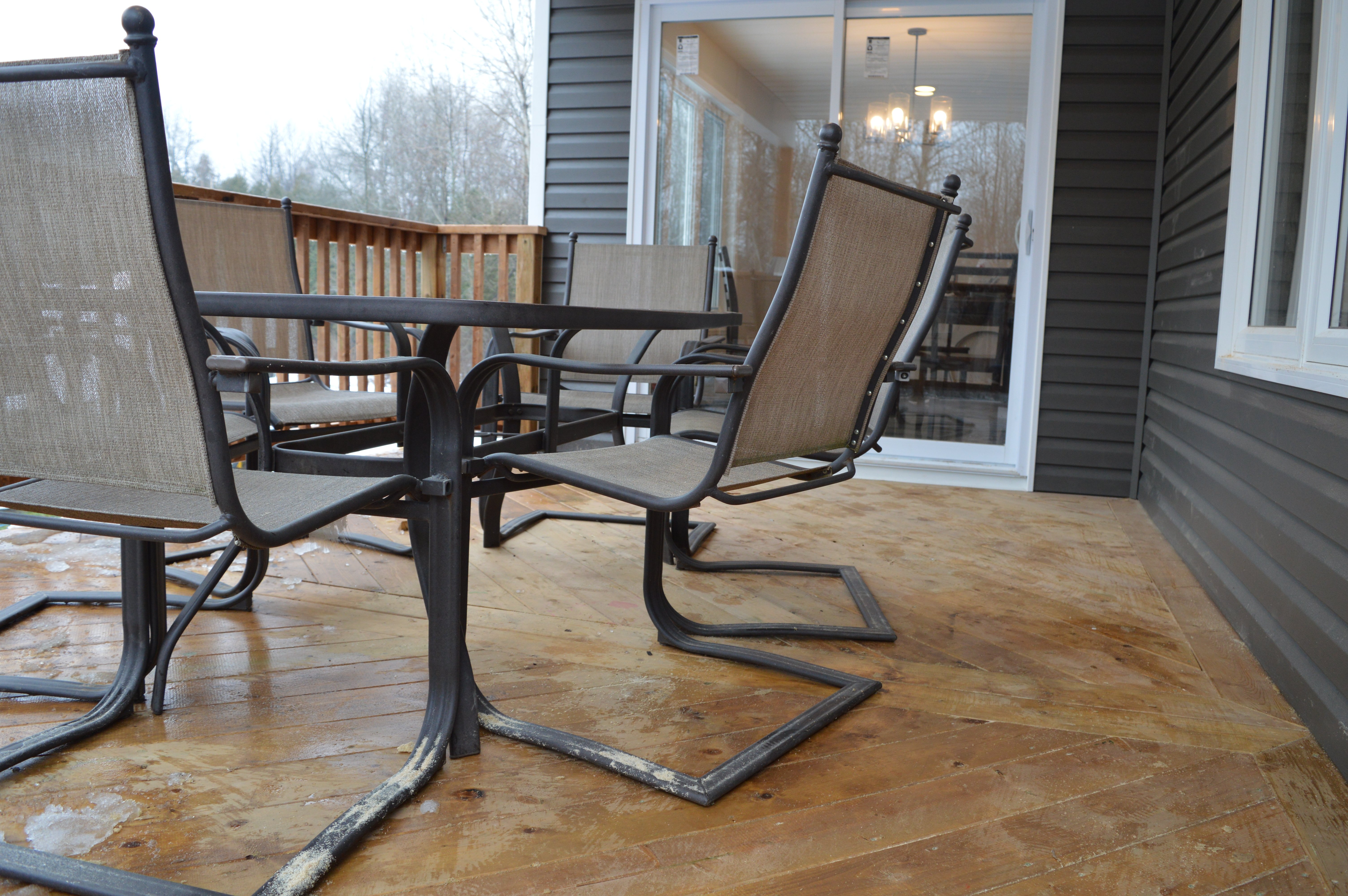 So why did I decide to do this pattern? Our plan is to someday extend the deck and make it twice the size that it is currently. I thought it would look really nice to have a big diamond pattern made up of four smaller squares with deck boards on a 45 degree angle (similar to this picture). Great idea, right?  This was my first ever deck so I may have taken on more than I could handle. If you want a quick and easy deck project, don’t do angles. 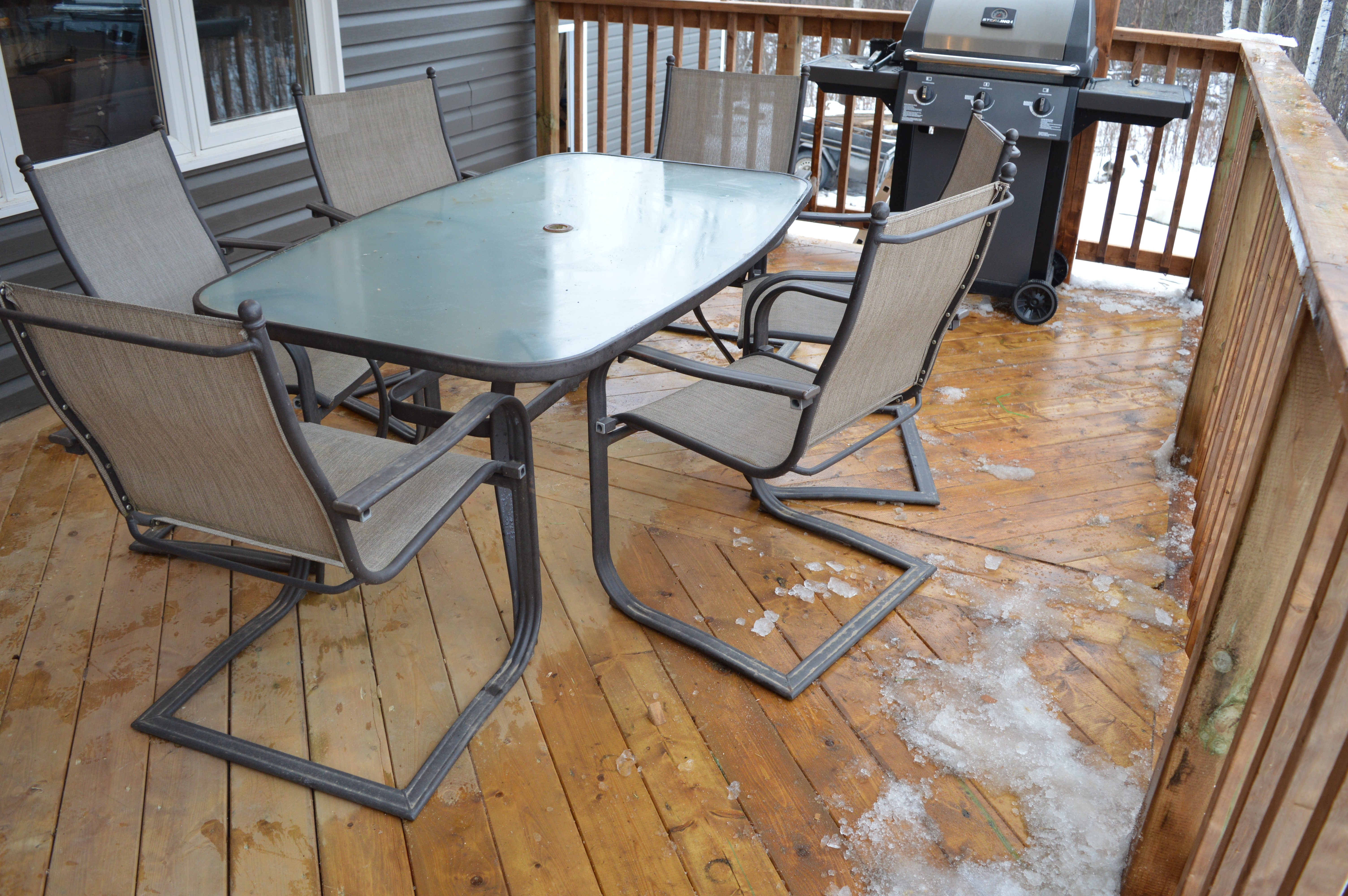 There was a lot of extra work involved with the diagonal deck boards. I did a perimeter board around the two halves of the deck, so this meant that all the inner diagonal boards didn’t land on the main structure of the deck. So I had to add extra blocking between the joists to support the ends of all the deck boards. My dad helped me with this part, which was a huge help because I really didn’t know what I was doing. 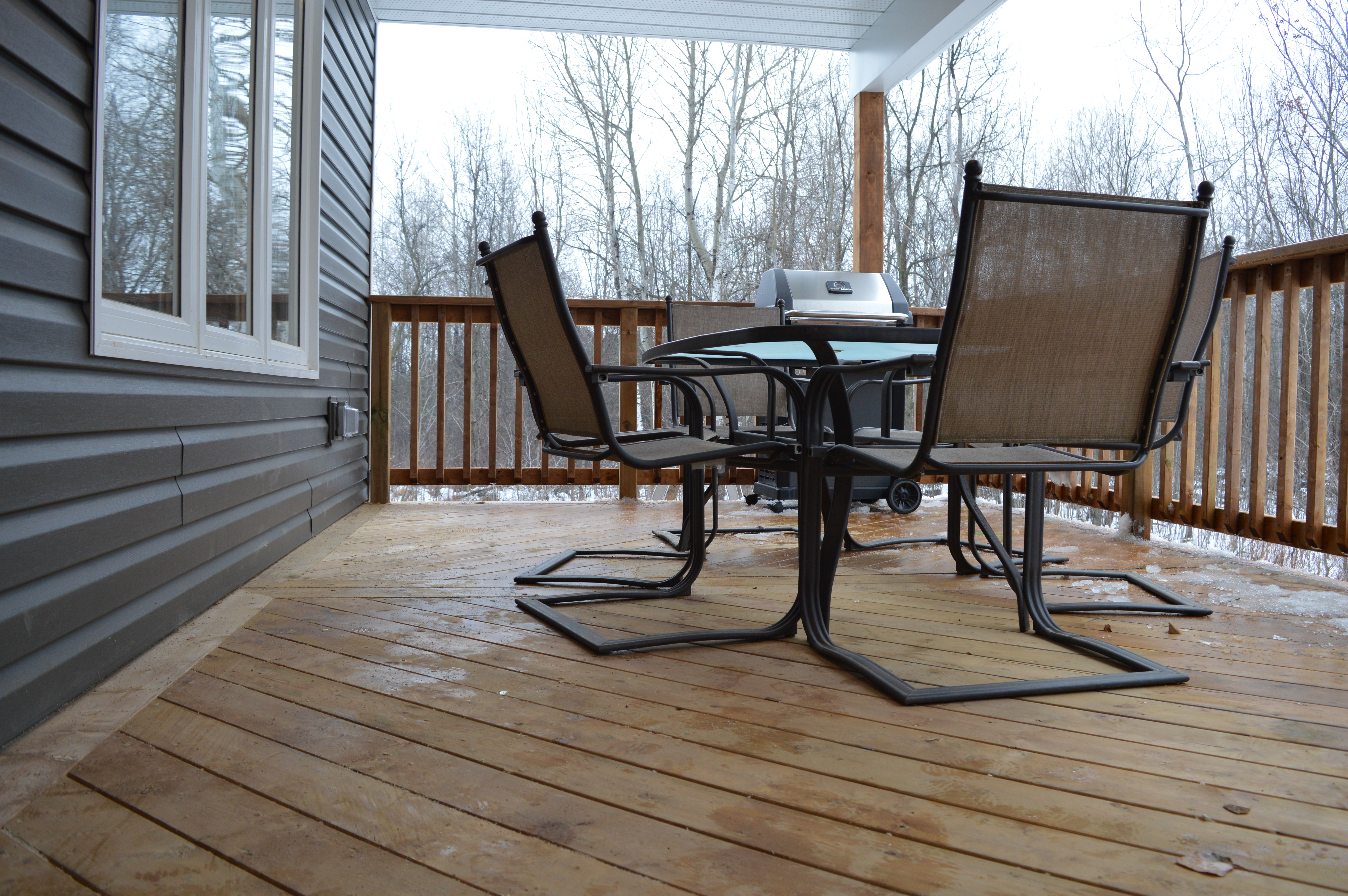 I finally got all the deck boards done (with Tony’s help) by the beginning of November. Then we got snow and things were put on hold for a while. 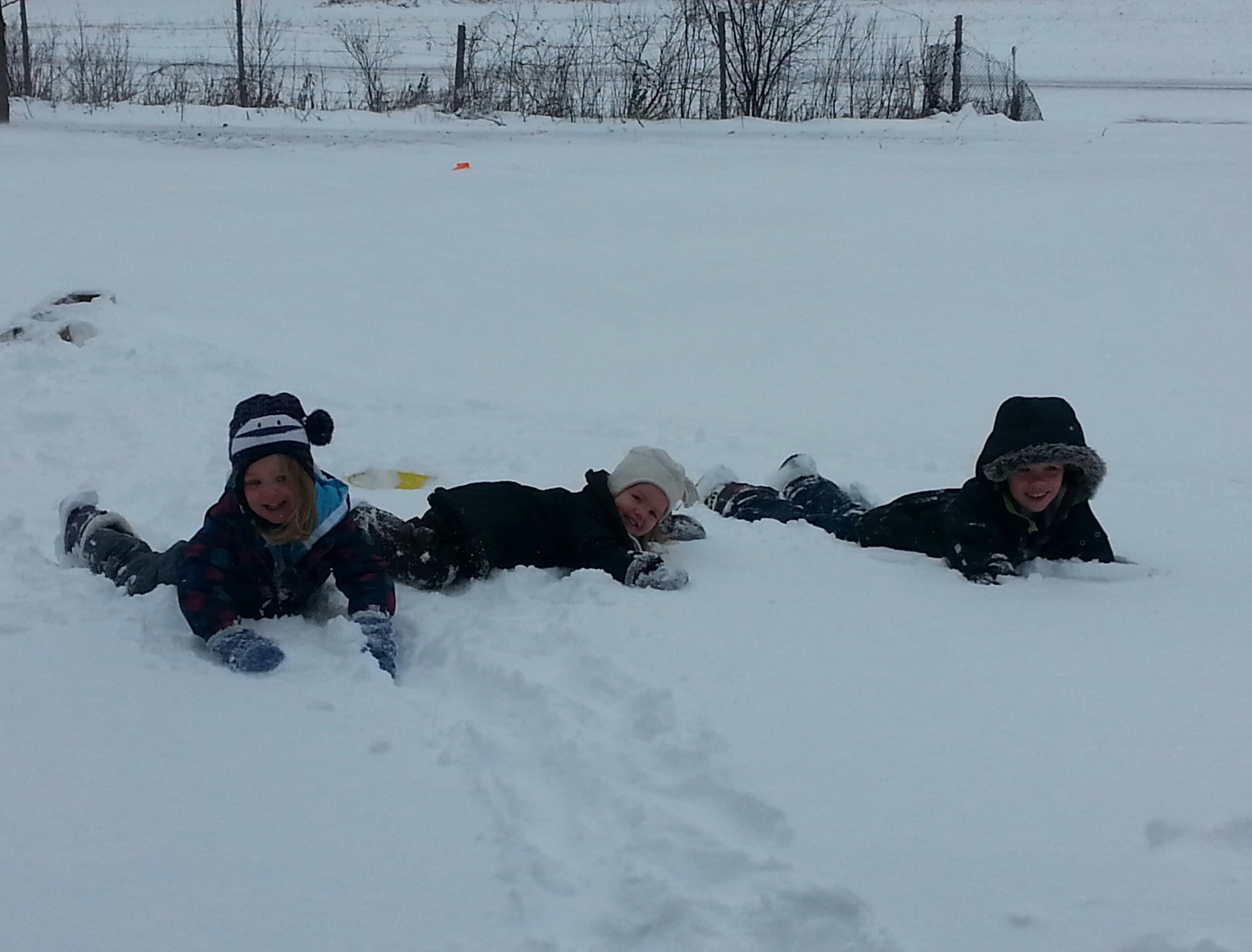 During a few of the milder days we started to work on the handrail. Tony installed all the posts for me; he used large bolts and fastened the posts to the joists from underneath the deck.

We decided to go with a simple railing design that would be very sturdy. We used brown pressure treated 2 x 4’s for the top and bottom rails that we screwed to the posts. The top board is a 2 x 6, which is wide enough that it can also be used as a handy spot to put your drink. I also did my first ever scarf joint on the top board of the handrail. Tony told me that it was probably better than he could have done, so I took that as a huge compliment! 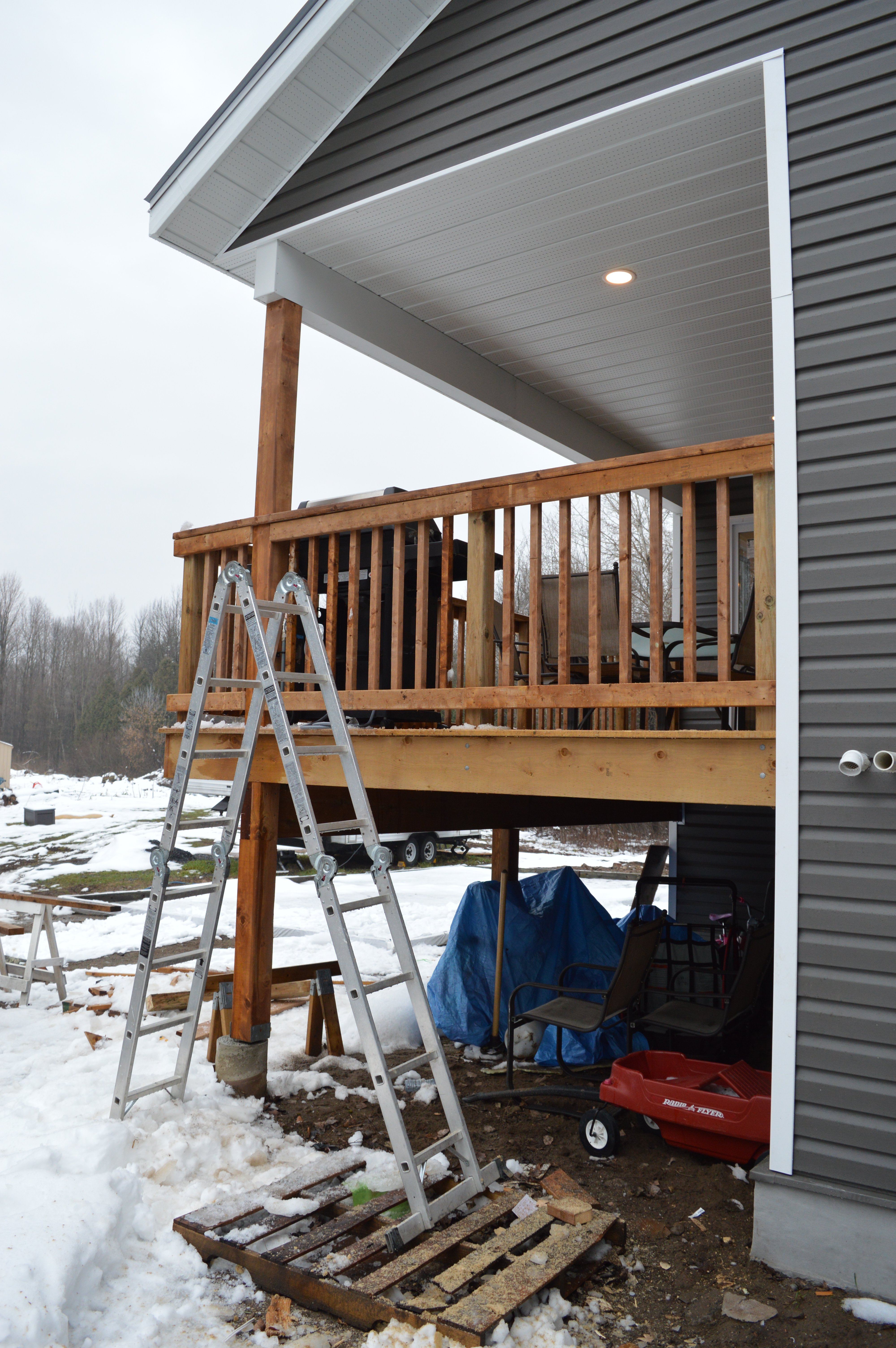 Once we finished with the top and bottom rails, I screwed the spindles to the 2 x 4’s, spacing them around 4 inches apart. 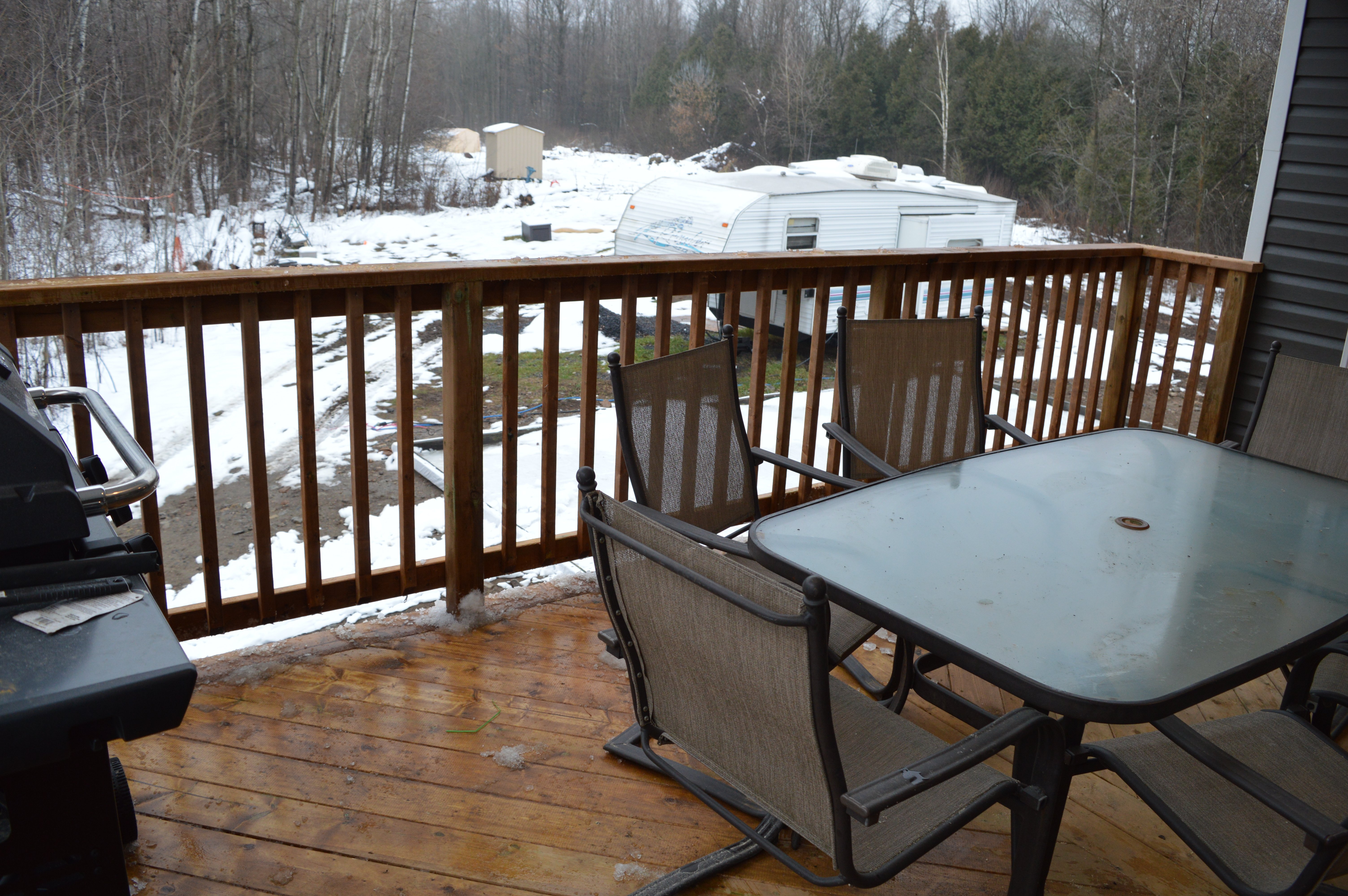 Even though the deck seemed to take forever, I’m pretty proud of how it turned out. It was a difficult pattern, it’s not perfect, but it’s not too bad for my first deck project. And I really enjoyed doing the work, especially on some of those beautiful days in September and October. I so look forward to next summer when we can sit here, have a drink, and relax! 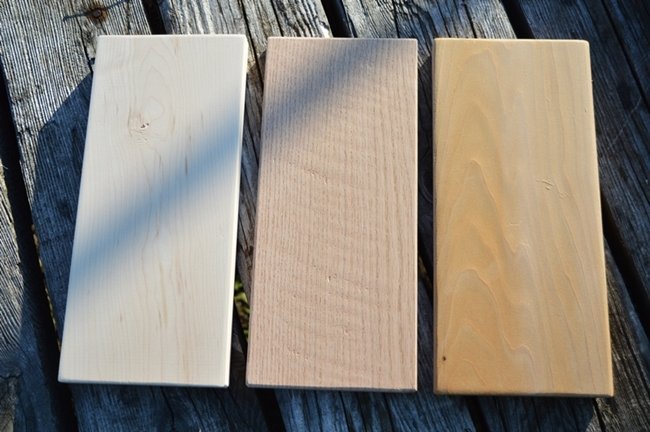 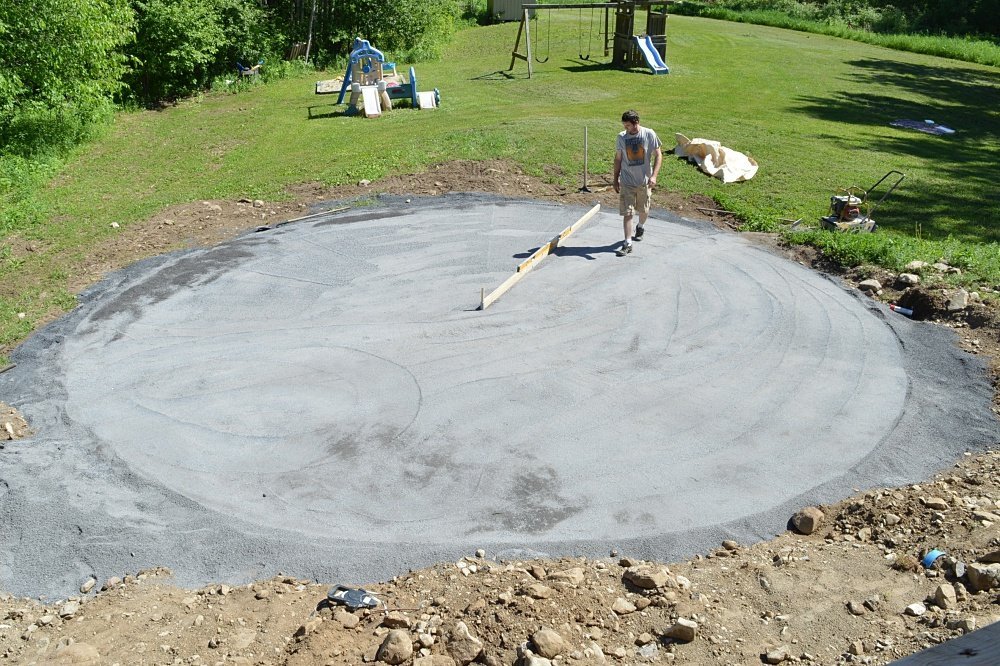 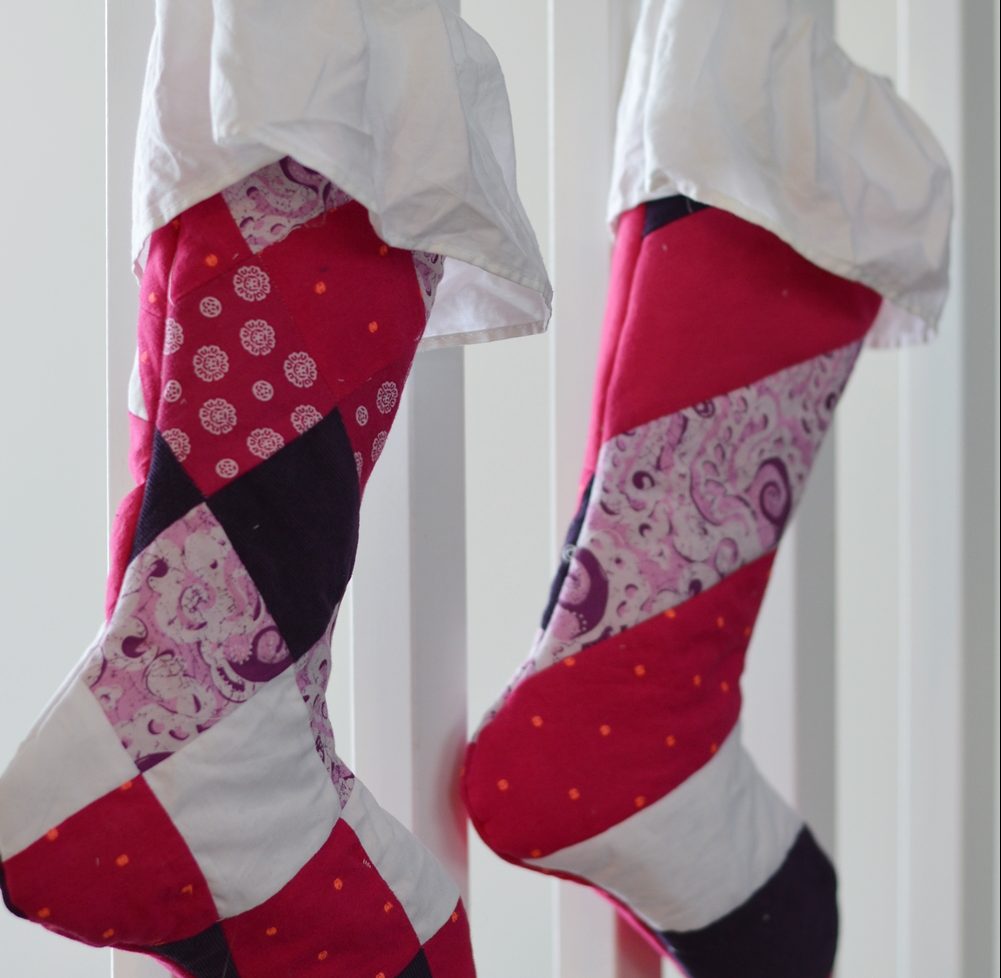 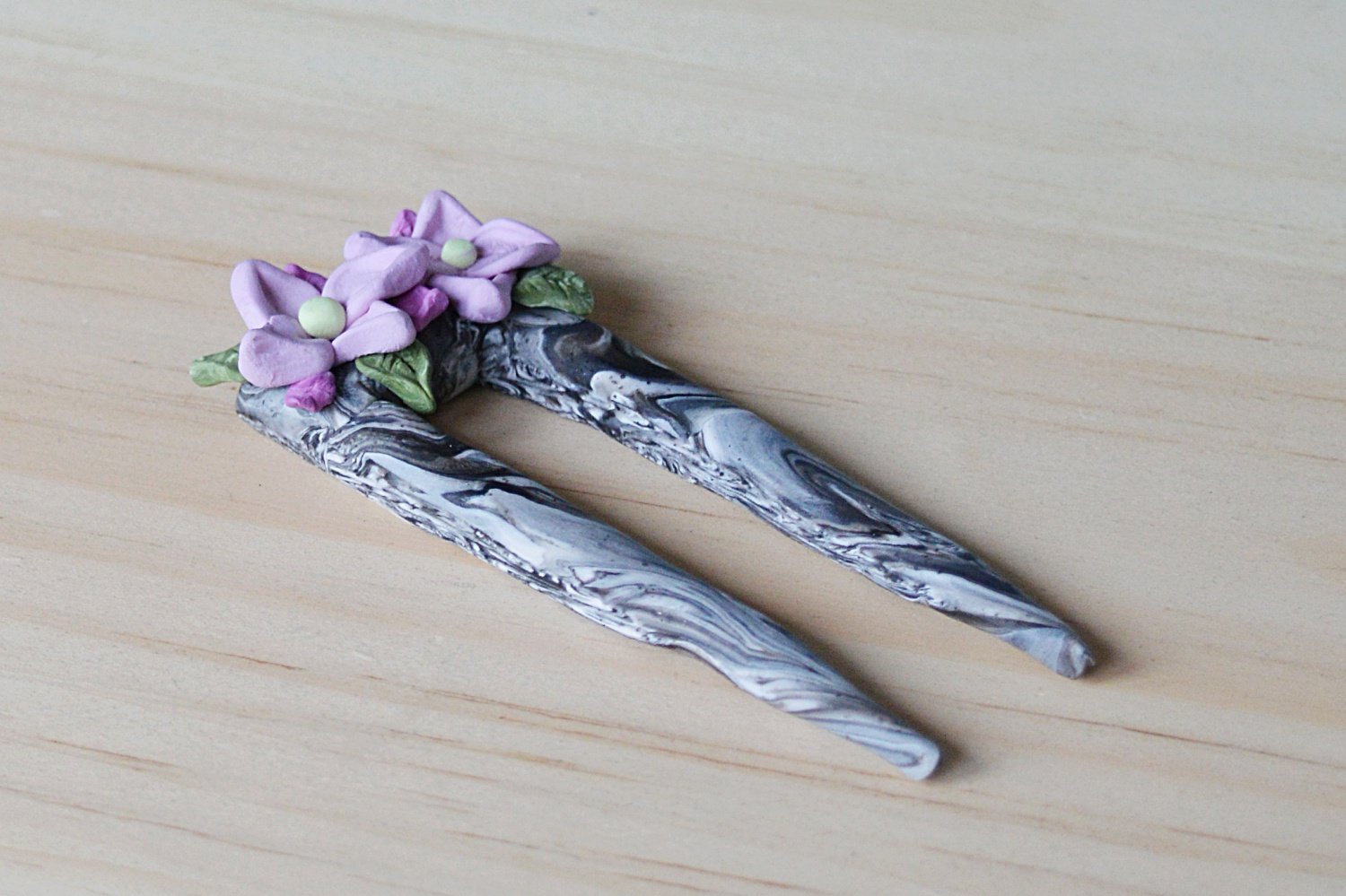